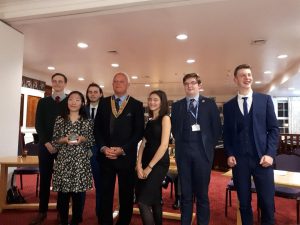 The Rotary Clubs of North Worcesteshire and Bromsgrove hosted jointly the Michael Holt Debate on 13 November at Droitwich Golf Club. The debate takes place annually between two local schools, and is run in memory of Rotarian Michael Holt who himself was a keen debater. This year both North and South Bromsgrove High Schools competed. The motion this year was ‘This House believes that old people create an unsustainable drain on the State, and that legislation will be needed to make them self sufficient.’ South proposed the motion, and North opposed the motion. After a closely fought contest, the judges determined that the North Bromsgrove team won, and the trophy was presented to the winners by the President of North Worcestershire Rotary Club. A very good evening was had by all in attendance, and the standard of presentation on the part of both teams was impressive. Pictured are the two school teams with the President of the Rotary Club of North Worcestershire.

This entry was posted in Secretary's Notices on 13 November 2018 by Ron Pearce.

Warning: Use of undefined constant REQUEST_URI - assumed 'REQUEST_URI' (this will throw an Error in a future version of PHP) in /homepages/37/d34562897/htdocs/wsb823584101/blog/wordpress/wp-content/themes/Rotary/footer.php on line 29